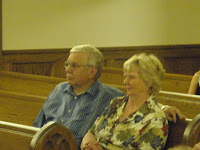 My blog buddy, fellow-servant, MBC grad, and friend John Dobbs is asking about preachers who influenced us. He wants to know who Passed the Torch to others. One of the preachers who passed the torch to John was my Dad, Cecil May, Jr. He passed to me, too.

When I was born, Dad was preaching for the Fulton Church of Christ in Fulton, MS. When I was 6 months old, he got a job at Columbia Christian in Portland, OR; but that was on the left coast in the late 60's, and we didn't stay long. By the time I was three, we were already back in Mississippi, and dad was preaching at the Vicksburg Church of Christ, high on the hill on the north side of I-20. We stayed there until I was in the 5th grade, so I began listening to sermons while in Vicksburg. I heard some great ones. I can't tell you the title of one of them. I couldn't give you an outline or the name of series he preached. What I know is that I grew there and I know other people grew; and I believe that was a result of his preaching.

When we moved to Florence, AL, in the middle of my fifth grade year (and I only had one 5th grade year), we went to the church that met on the campus of International Bible College, now Heritage Christian University. There were some great preachers there. Great preachers already, and others who would be great preachers. Charles Coil was powerful, and his way, if you know what I mean, was something to be respected. James Long was preaching a sermon about dying to self on the day that I was baptized. He was a great preacher. Jim Martin was there. He's a great preacher. But the preaching that I remember the most was the preaching I heard from Dad as we travelled all over Alabama and Mississippi. One sermon he called "Husbands, Wives, and Tongues." He preached that in a lot of meetings. I was never sorry to hear that I was going to hear it again. It was the most practical sermon. I wonder how that sermon played a role in my passion for marriage ministry now.

Even after we moved from Florence, then, Cecil May was the preacher who most often had my ear. That changed finally in 1989. Another preacher got my ear then. I've heard this guy nearly every Sunday since. He is me. But I like to think, that in all of my sermons, I still get to hear a bit of my dad.

I've got to say that the most significant lessons I learned from my dad, I learned watching him. I could write about what a good pastor he was. I think you know what I mean. But he was, and is a great family man. He loves my mother, and I never had reason to wonder if I would live in a broken home. He is also a great dad. If I had a dollar for every time he told me that he was proud of me, I could have funded Magnolia Bible College for the next hundred years. I preach a lot of grace, and I learned grace from him – from his sermons certainly, but moreso from his home-life – from the way he treated me.

As my dad grows older, he is still doing some great preaching. He spoke at a church leader's event for Oklahoma Christian two years ago. He did a great job! I'm still hearing about it from leaders from around here who still tell me that they heard it and appreciated it.

When I think about the preachers dad has influenced, including me, my brother, and my brother-in-law, this verse comes to mind with a little adaptation for the circumstances:

Thanks to Cecil May, Jr., my Dad, who is still educating and training preachers at the V.P. Black School of Biblical Studies, for passing the torch to me!

Excellent, Richard. Thanks for sharing that from the perspective of a son. I love you and your family.

I enjoyed reading your tribute to your dad. Thank you for the time put into it.

Thank you for the window into this PK's experience with a loving preacher Dad!

Richard, what a wonderful piece about your Dad. I have so much respect and admiration for him. I am indebted to him for what I gained from him at a very formative time.

Good stuff, Richard. Your father has inspired many young preachers and I'm glad his ministry started in his own home, inspring you and your family.

dagwud
Married to JeannaLynn. Brad and Brittney are my kids. Graduate of Magnolia Bible College (B.A.) and Oklahoma Christian (M.A.). I've served in Cleveland, TN; and Columbus, Vicksburg, and Winona, MS. Now I'm in Yukon, OK coaching people to grow close to Christ and their spouses. I direct a non-profit Marriage Mission with my wife. I love my life.

Friends and Other Stuff

My Colleges and Universities